The Jews United for Justice Campaign Fund scored five amendment votes at today’s DC Council budget hearing based on whether they advanced a #JustRecoveryDC.

Four of the amendments passed, bringing us closer to a budget that advances racial equity by investing in DC’s Black and brown communities. Three of the successful amendments raised new revenue by scaling back ineffective corporate giveaways and asking our wealthiest residents to pay their fair share of taxes.

The fourth successful amendment transfers administration of school security contracts from the Metropolitan Police Department to DC Public Schools, an important step in moving toward safe and police-free learning environments.

Councilmembers Brianne Nadeau (Ward 1), Trayon White (Ward 8), and Robert White and Elissa Silverman (At Large) earned a perfect 5 out of 5 score today on our budget scorecard.

We further thank Councilmember Nadeau for attempting to advance necessary expansions to DC’s rent control laws by removing a provision in the budget that could lock the District into a broken rent control system for the next decade; this amendment was pulled before a vote could occur. We are also grateful to Councilmember Robert White for leading on the amendment to ensure DC’s public housing units are safe, clean, and dignified for all residents. Public housing repairs must be the top priority in DC’s capital budget; had that amendment passed it would have made that priority clear for the city.

As the budget advances to a second reading, we urge the Council to fully fund essential public services, expand rent control, and shift money away from the MPD. There are still too many unmet needs, and now is the time for bold leadership that advances racial justice beyond mere rhetoric. When a clear supermajority of Washingtonians say ‘raise taxes’ to create a just recovery, our leaders must heed that call.

Earlier this Council session, the JUFJ Campaign Fund scored four additional votes, which will be included on our complete 2020 scorecard released in early 2021. These votes occurred prior to the resignation of disgraced former Councilmember Jack Evans (Ward 2). 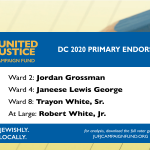 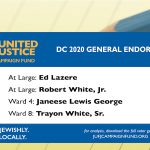